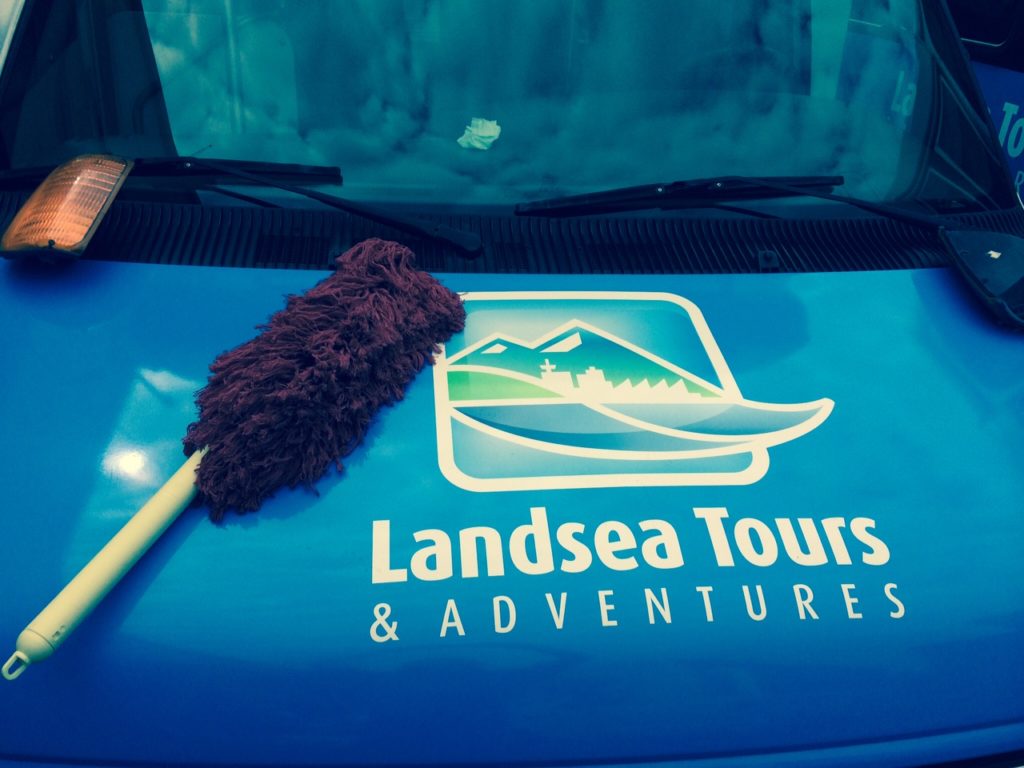 How can a tour company be environmentally friendly? That’s a question asked around the Landsea Tours office everyday.

Vancouver is at an interesting crossroads in its history. The city is striving to become more sustainable, and locals and visitors alike are flocking towards locally sourced food and green infrastructure. So too is Landsea Tours & Adventures, a company filled with engaged, planet-conscious people. Our services however, present a problem: we feature vehicular tours. Surely that is a roadblock to sustainability, right? Not as much as you might think.

Our task of going green started small, with a committee of twelve eager employees. After one day’s work, compost bins had appeared in the kitchen. After three days, a bike rack materialized. By the end of the week, the company’s cleaning products were replaced by environmentally friendly alternatives like diluted vinegar. And by the end of the quarter, the accountants had concluded a mail audit, eliminating defunct subscriptions to reduce paper waste. Fairly soon after, and with the assessment and guidance of GreenStep Solutions, the entire company was involved.

These strategies are effective at our head-office, but they fail to address the team’s largest environmental concern: Emissions. It was surprising to learn, then, that Landsea Tours had for years printed brochures on paper made from 100% post-consumer recycled fibre reducing its annual net greenhouse emissions by 4,500 lbs. and saving over 2,300 lbs. of solid waste from landfills. Moreover, for decades the company had been researching green fuel alternatives. Company founder Scott Mason, a former aircraft mechanic, is spearheading this movement and had a lot to share about our biofuel history. “As a company, we have always tried to be environmentally friendly, and be creative in doing so,” he explained. “When roadblocks inevitably arise, we find a new way to be creative.”

This journey originated in 2007, when Landsea Tours began operating all diesel buses on a 50% BioDiesel blend. The buses initially used soy-based biodiesel, but in 2008 switched to waste-sourced, non-agricultural biodiesel instead—a more sustainable alternative. The company saw immense success with this program, which it continued until 2010 when a lack of fuel availability combined with a substantial tax increase made the project unsustainable.

Meanwhile in January 2008, Landsea teamed up with Ford to field test a pre-production prototype zero-emission bus (Ford H2ICE) powered solely by hydrogen. Operating with a 99.7% reduction in CO2 emissions over today’s gasoline engines, Landsea conducted daily sightseeing tours that introduced thousands of visitors to zero-emission driving. The bus was reluctantly returned to Ford when the project came to an end in 2010, by which time the company had logged an impressive 38,000 hydrogen-powered kilometers.

So what does all this mean? These initiatives demonstrate just how important environmental issues are to the company. Landsea Tours has taken risks to strive for sustainability in the past, and it looks as though the future is peppered with countless more. “We are always looking towards the next advance in technology, electric or otherwise,” president Kevin Pearce declared. “We are a fast growing company, and I want to ensure we grow in a sustainable manner.” The foundation already in place shows how serious Kevin is about his comments. Investigation has redoubled into diesel-propane and diesel-natural gas blended fuels to reduce the carbon footprint. A rainwater filtration system is being developed to recapture and re-use as much water as possible while simultaneously preventing waste sediment and hydrocarbons from flowing into False Creek. Landsea has partnered with Urban Impact to introduce a comprehensive recycling program into the company. This project has been overwhelmingly effective in reducing company waste and has revealed the surprising amount of materials that are now recyclable.

Most importantly, Kevin insists, “Landsea recognizes the role it has as a green company in Vancouver’s community.” The company organizes participation at local farms and in shoreline clean-up efforts and pushes for sustainable commuting by all employees. Landsea Tours recognizes that the burgeoning green industry in Vancouver is a collaborative movement and is trying its hardest to keep the ball rolling. This momentum is felt most strongly within the company itself. Enthusiasm around the office for environmental projects is palpable, especially as Landsea strives for Sustainable Tourism’s Gold rating (their initial evaluation was Silver). While the green movement began with a small committee, it has quickly spread to include the entire company. Employees are becoming greener on their own, as they realize the impact each person has environmentally. As a striking example, the bike rack quickly became so full that a second had to be installed, with a third looking necessary in the near future.

The green movement at Landsea Tours & Adventures is still young, but it is impressively determined. At this rate, the sky’s the limit.