Feb 27 is International Polar Bear Day, a day dedicated to raising awareness about the challenges Polar Bears face in the Arctic, and what citizens can do about it! 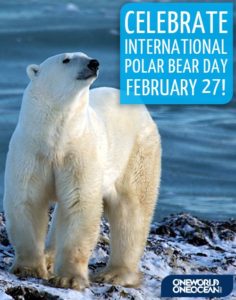 While polar bears may live far away, actions businesses take in our communities affect them every day – the arctic is warming much faster than the rest of the globe due to climate change!
The primary conservation concern for polar bears is habitat loss due to rapid loss of sea ice, and reduced access to their seal prey due to climate change. Scientists predict that as the Arctic continues to warm, two-thirds of the world’s polar bears could disappear within this century.
While loss of sea ice is the primary threat to the polar bear’s long-term survival, other challenges include pollution, increased commercial use of the Arctic, over-harvesting, disease, and inadequate habitat protection (denning and seasonal resting areas).
Research shows that it’s not too late to act to save sea ice and polar bears by greatly reducing greenhouse gas emissions – you can start today by taking any of the following actions!